Some of you will probably recall that the inaugural film in our current series (Ordinary Ladies) was The Reckless Moment, a 1949 drama directed by Max Ophuls in which Joan Bennett plays a housewife who thinks (incorrectly) that her daughter has just murdered her deadbeat boyfriend (The daughter's boyfriend, that is; not Joan Bennett's boyfriend. Damn those misplaced modifiers!). In an effort to protect her daughter, she disposes of the body and hides any evidence of the death; and that's when the trouble really starts. 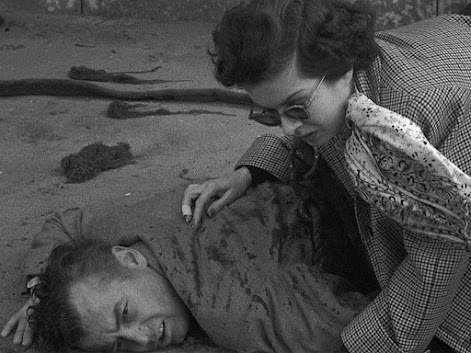 As I say, that was the film that we showed back in June (if you would like to refresh your memory, please click here).

Our next film (on the 28th of July) is a remake of that film, released in 2001 and starring Tilda Swinton in the Joan Bennett role. 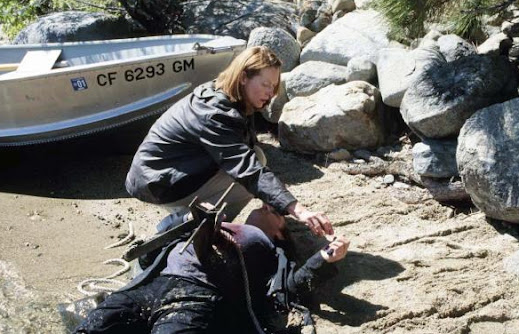 The Deep End marks the first time I will be showing a film and its remake in the same series, but in this instance I feel that the two films compliment each other beautifully. (Also, if you want to be hyper-pedantic, The Deep End is not a remake of The Reckless Moment; both films are simply adapted from the same novel. But I digress.) 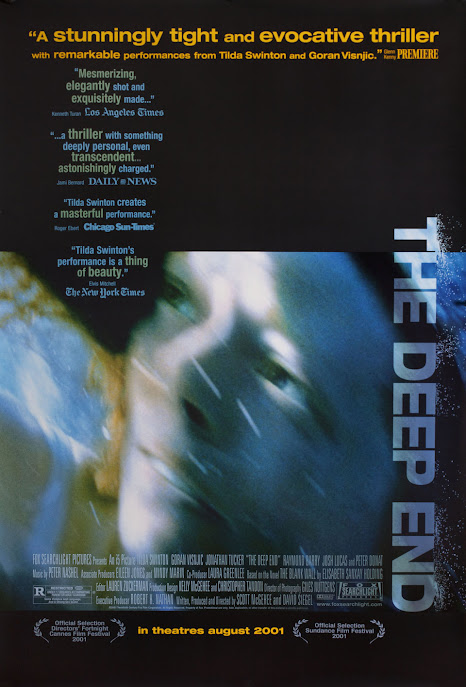 The Reckless Moment was released during the time of the Hays Office (Hollywood's extremely draconian censorship code) and much of the nuance of that film lies in what was not said. Joan Bennett's daughter has been fooling around with an older (rather sleazy) man, and when his body turns up on the beach, Joan Bennett immediately assumes that her daughter is the murderer. She also assumes that her daughter had been raped, and had killed her assailant in self-defence, but none of that is stated openly in the film. Under the terms of the Hays Office, murderers are not allowed to go unpunished, and rape cannot be portrayed, so the film is rather more subtle in its handling of these matters.

It's also made very clear later in the film that Joan Bennett is afraid that her daughter is pregnant (another forbidden topic) and of course James Mason has turned up by this point to blackmail her. 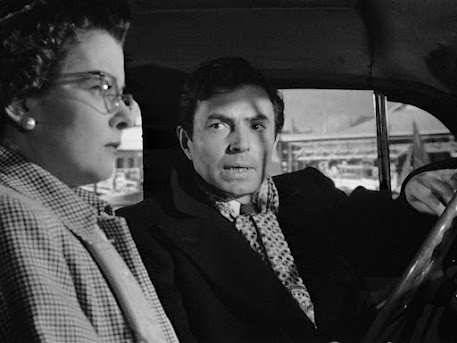 By 2001, American society had shifted quite a bit, and teenage pregnancy out of wedlock was no longer the social catastrophe it would have been to a middle-class household in 1949 (still not a good thing, but not the apocalypse either). There were also far fewer restrictions regarding what could be explicitly shown in a film, and of course a great deal had changed regarding the place of married women in society.

Much of The Reckless Moment is devoted to Joan Bennett's attempts to raise the blackmail money in the absence of her husband. Married women in the 1940s did not have bank accounts or access to the household finances; something that would have been taken for granted by cinema audiences of the time. As a housewife with no assets of her own, her options would have been extremely limited, and that of course was something the film examined in some detail.

Tilda Swinton's position in The Deep End is rather different (thank you, Second Wave Feminists!) and as a result, the film is obliged to shift its emphasis somewhat, while still telling the same basic story. It is precisely those shifts that make comparisons between the two films so interesting.

Our screening of The Deep End on the 28th of July will be our final film night before we take a brief "Summer Recess" over August; but we plan to return for "Ordinary Ladies Part II" in September, so stay tuned for further updates!

In the meantime, I look forward to seeing you this Thursday. 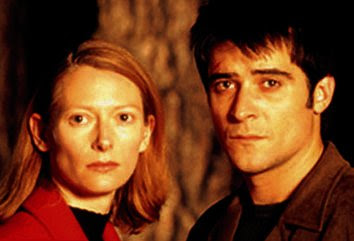 Popular posts from this blog

Movie Nights at the  Victoria Park Baptist Church And so life goes on. Some of you may remember that our film series in early 2020 was rudely interrupted by a Global Pandemic. The subsequent year and a half has been, well... You know things are pretty bad when you find yourself wondering if there is a plural for "Apocalypse". But at any rate, here we are ( Apocalypses? Apocali? That's going to bother you now, isn't it?) facing the prospect of attempting to pick up the pieces of Civilisation - assuming of course we don't go into another Lockdown first. ( Apocalyae?   Apocalim? ) Movie-going, like so many communal activities, has taken a severe hit during the Pandemic, and I'm willing to hazard a guess that most of the films you have watched over the last eighteen months have been from the comfort of home, with, at most, a family member or two. But watching a film like this: ....isn't really the same as watching a film like this : Sadly we don't quite
Read more

Access to the Church, and our Temporary Underground Cinema! 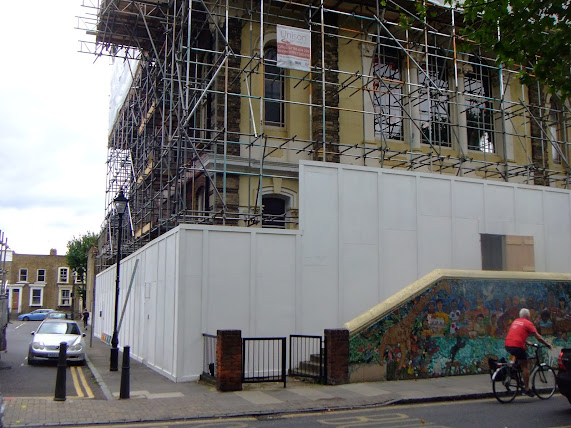 We have witnessed a number of truly cataclysmic events in the past year or so: a Global Pandemic; an attempt to overthrow the Government in the US; the catastrophic but entirely foreseeable fallout from Brexit. And then the Church Roof Collapsed. Okay, I suppose a leaking roof isn't the worst problem most of us have had to face this year (the horrors never stop: all the local grocery stores are completely out of grapefruit juice ; truly we are living through Armageddon) but       (a) it is symptomatic of the kind of year this has been, and     (b) it does mean that we won't be organising these film evenings in the usual Church Hall. While the fearless roofers and scaffolders tirelessly wage their battles against the Forces of Entropy and British Weather, we shall be gathering in the Church basement for our movie nights. Technically, I suppose that means we will be assembling in the Crypt . Is the basement of a Church always a Crypt? For what it's worth, this particular Cr
Read more

And Our First Film Is... 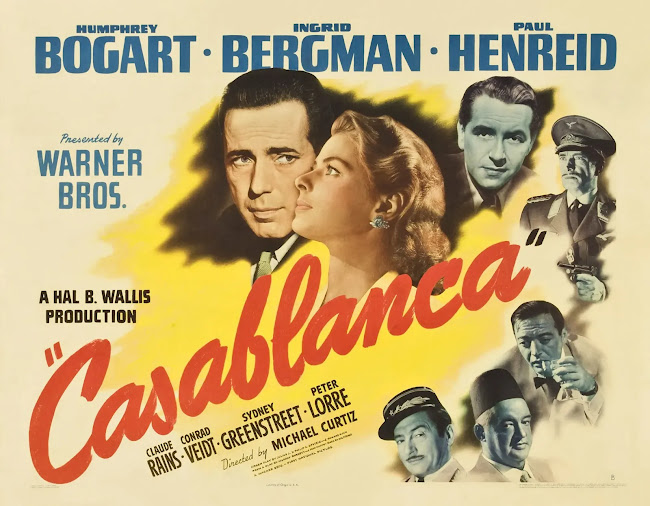 Casablanca (1942) For our first night back in the cinema, I wanted to choose something that was suitably epic, and was also an undisputed classic. And so Casablanca it is. Casablanca is not only one of the great films of all time, it is also a film that is especially apt for this particular moment in history.  Made just as the US was entering the Second World War, Casablanca is a film about immigrants and refugees, made by immigrants and refugees. The isolationists, xenophobes and nationalists would do well to note that one of the all-time beloved American movies was made with almost no native-born American involvement whatsoever.  The only Americans (by birth) in the cast were Humphrey Bogart and Dooley Wilson (and many xenophobes out there would probably say that Dooley Wilson doesn't count). For the rest, there was of course Ingrid Bergman (Swedish), Conrad Veidt (German), Paul Henreid and Peter Lorre (both Astro-Hungarian) and the irrepressible Claude Rains (who was from Clapha
Read more